"The Legend of the Starving Artist" 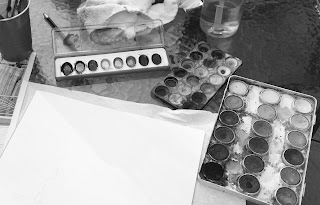 As a college student I am often asked what my major is. When I respond that I am a studio art major, I'm fairly used to less than enthusiastic responses from both my peers and older adults about my chosen field of study.

When you hear "studio art major" I think the image that commonly appears in peoples heads; is a sleep deprived, starving, poor, recluse living in a tiny decrepit studio apartment and creating disturbing abstract paintings  that look more like a crabby toddler made them than an adult with a hard earned  ( and very expensive,) advanced degree.

To be honest this is mainly what I thought studying art meant for many years. So, while art has always been a massive part of my life, and one of my favorite things, I was determined not to be a "starving artist." I thought "i'll study design, or a social science or maybe even communication, but never art." Than things began to change, I started hearing more and more from teachers, family friends and other successful adults that getting a degree in Art might not be a terrible idea after all. I heard of, or met, people who taught, were illustrators, worked as designers, owned their own businesses, did consulting, and had non-profits, all of these people had either gotten an art degree, or explained that as long as you are willing to work hard, and be open to the variety of jobs within the visual arts, you can actually make a decent living. I was pretty excited.

After spending a semester planning on being a social work major, than taking some time off due to health problems, I came back to college determined, with the encouragement of family and former teachers, that It would be an art degree or nothing. I chose a school that had a wonderful department, but was mainly known for agriculture and science. And you know what? Its working out just fine.

In this day and age, even with the price of schooling and the messed up economy, having a college degree, or at least an AA or attending a tech school is generally a good idea.

College isn't for everyone, and i'm not exactly your typical art student, but I love creating things and bringing joy to people through art and creativity. Maybe you still think that me, and other students like me are crazy, but hopefully this gives a little insight to how being a studio art major, might actually be a wise choice for some students, and that maybe we won't all be starving artists after all!